I'm torn on the Disney live action movies. There are a couple (Maleficent, The Jungle Book) that have been surprisingly good. Some (Cinderella, Beauty & The Beast) that have been just OK. Then there are some (Aladdin, Maleficent 2) that haven't been that impressive at all.

The Lion King falls into the 'OK' category.

While those in charge of this movie didn't make the same mistakes that Aladdin did in deviating much from the original script, they had mistakes of their own.

If you're not telling a new story (like in Maleficent or Dumbo), then why exactly are you making the movie? 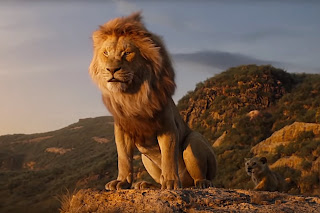 If I want to watch The Lion King, then wouldn't I just watch the 90's version? What's the point? So that I can see overdone CGI instead of colorful animation? Sure, I guess it has the 3-D aspect going for it, but I couldn't care less about that.

They're making money, but that's more due to the fact that they are Disney (it's a well-oiled marketing and money-making machine) than producing quality content.

Alright, onto the movie.

A lot of people claimed that they had an issue seeing the CGI animals speak. I didn't have an issue with that. It didn't seem off-putting to me for the most part.

My biggest issue is that, just like with Disney's Christopher Robin, the CGI really has a negative impact on the color.

Zazu was a colorful blue Dodo bird in the animated version. But he's bland in this version --- both in color and voice, actually. John Oliver was alright, but not as good as the 90s version.

Scar wasn't as good as the movie version either. The color wasn't as vibrant. His black mane from the animated version wasn't probably realistic, but it sure made him stand out. Chiwetel Ejiofor's vocal performance was OK, but nothing compared to the classic version. Nothing at all compared to that version.

The rest of the voice actors were fine. I didn't take issue with any of their performances.

Actually, Seth Rogan was a great choice for Pumba!

While I'm glad they followed the classic, I kept thinking to myself, 'I should really watch the animated version again.'

I could've done without some of the updated lines of dialogue.

'Let's do this' was a line Simba used before going off to make the rounds with his father. It seemed pointless -- as though it was just for the purpose of updating the movie.

Some of the updated lines of dialogue actually made me feel sorry for Scar.

At one point, Simba says something along the lines of, 'My dad says when I'm king, I'll give you orders. How weird is that?'

Simba: Hey Uncle Scar, guess what?
Scar: I despise guessing games
Simba: I'm going to be king of pride rock
Scar: Oh goodie ...
Simba: My dad just showed me the whole kingdom and I'm going to rule it all (chuckles)
Scar: Yes, well, forgive me for not leaping for joy. Bad back and all
Simba: Hey Uncle Scar, when I'm king, what will that make you?
Scar: A monkey's uncle
Simba: (laughs) You're so weird.
Scar: You have no idea

Now, I admit, the part where he says he's going to rule it all --- that's a little brat-like as well. But Simba genuinely wants to know what Scar is when Simba is king. There's no curiosity in the new line of dialogue where kid Simba comes to visit Scar just to brag about being his future ruler.

Another updated bit of dialogue that comes off as juvenile is the scene where Simba confronts Scar at Pride Rock. 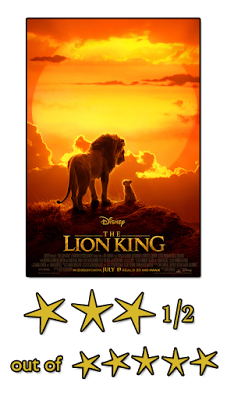 The lioness' come to Simba's aid and Nala says, "Simba is the rightful king (just like in the animated version)," but then adds "If you want to get to him, you have to go through us!"

Why add that? We've heard that line (or some version of it) in so many movies. Why add something so lame -- just for the sake of updating it? The way it was done in the animated version trumps the 2019 live action sequence.

Overall, the 2019 version of The Lion King paid a lot of homage to the original by not going too far from the original movie, but it made me want to watch the original (and better version) instead of the movie I was watching.

I'm assuming that wasn't the intended point of making this movie.