Jenn's Suglarlicious Bakery in Gastonia is the kind of bakery you'll want to stop at if you're looking at a large bakery with fanciful frosting and lots of treats.

I'd Googled the bakery to find the address, but I didn't know what to expect when I went in person. Located in Franklin Square, Jenn's is right next to a Subway off of East Franklin Blvd.

There's a purple carousel pony placed against the window, which actually gives an idea as to what the cupcakes are like.

There were 12 different flavors of cupcakes available. Each cupcake had a different color (or, in some cases, two) of carefully decorated frosting. With pink, purple, turquoise, yellow and orange frosting, the cupcake case almost looked like a rainbow.

I've been taken in by colorful, decorative frosting before, though, only to be disappointed by the flavor of the actual cupcake. I probably could have picked more flavors, but I ended up settling on three: the Neapolitan, the Lemon and the Mint Chocolate Chip. 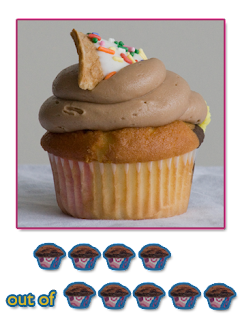 I remembered trying a Neapolitan cupcake from Suarez Bakery back in February and not being too satisfied. That one was a vanilla cupcake with strawberry frosting and chocolate sprinkles. I thought it was a nice idea at the time. The result, though, was three flavors that are fine by themselves, but didn’t taste good when combined.

This cupcake looked too good to pass up though. Why not give Jenn’s Neapolitan a chance? I’m glad I did because it was delicious.

The cupcake was actually baked with three different flavors. It was split up in thirds. One third was strawberry cupcake. One third was chocolate cupcake. The last one was vanilla.

The cone was a nice touch. The chocolate frosting tasted very sugary – almost grainy. It was like very finely ground up sugar. The frosting was almost too sweet, but thankfully they didn’t pile it on, so it didn’t ruin the awesome cupcake. 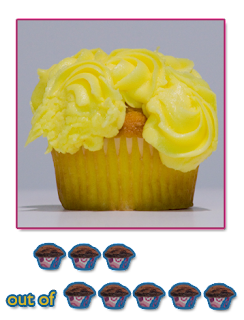 This cupcake stands out in the display case. It’s decorated with several touches of bright yellow frosting, each one shaped like roses. It basically looks like sunshiny happiness in cupcake form. That’s what drew me to this cupcake.

When I first took a bite I thought, ‘Well this isn’t too bad.’ Then I took another and then another and realized that there was no way I could finish the cupcake.

It was much too sweet! That bright yellow frosting overpowered any kind of taste the cupcake had. I usually like a good amount of sugar. I have a sweet tooth. That was just too much though.

I ended up scooping the frosting to one side of my plate and ate the rest of the cupcake by itself.

Most cupcakes need frosting to be edible. They are usually bland or dry without the frosting. This was a case that was entirely opposite. The cupcake had a very tasty lemon flavor. It was almost like a muffin – definitely edible by itself.

The frosting provides some impressive aesthetics, but it ruins a remarkably tasty cupcake. If you’re going to get this cupcake, my recommendation is scooping the frosting off of it. 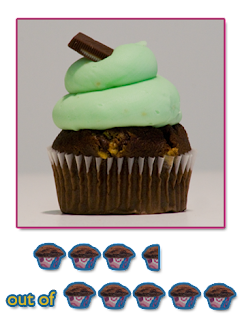 It was a very good dark chocolate cupcake. The frosting was sweeter than your typical mint chocolate chip cupcake, too, which made for a nice change of pace.

The sugary frosting was amazing coupled with the dark chocolate taste.

The small Andes mint on top of the cupcake wasn't a bad touch either.

The positives: they were decorated very nicely

The negatives: there's a little too much frosting in some cases