This week I tracked down Novel Sweets, a cupcake shop that strictly bakes vegan cupcakes.

I felt a bit like a detective trying to find a location with their cupcakes. I heard that Eco-licious carried the cupcakes, so I made my way to Commonwealth Ave.

It's the first time I'd been there, so I was in for a rude awakening when I tried to park in a parking spot along the street. They only allow backwards, angled parking. They had a sign that diagrammed how this should be done. It did look fairly easy. Nonetheless, I was irked that I had to re-park in the first place and that there was a fine for not parking the proper way, so I ended up leaving my car in the parking lot of a nearby diner.

After that mess I stopped into Eco-licious. They were all out of Novel Sweets cupcakes. They did have some healthy Twinkies, vegan Samoas cookies and other treats, but I was there for the cupcakes. The shop worker at Eco-licious told me that Novel Sweets has a stand at 7th Street Market and that parking for the first 90 minutes is free. Had I checked the Novel Sweets website, I would have known this.

I went to 7th Street Market and paid $4 to park in the ramp ($2 for every 20 minutes). Evidently I didn't park in the right place to get the first 90 minutes free.

After all that mess, the Novel Sweets cupcakes had a lot to live up to.

I found the stand, which was empty. The shop owner arrived within a minute though -- she was stuck in traffic. She asked if I wanted to wait until all the displays were set up or if I was okay with just getting some cupcakes. I happily took the cupcakes and saved myself another $2.00 in parking fees.

I chose three cupcakes out of their daily selection: a berry cupcake, a chocolate-peanut butter and a chocolate cupcake with vanilla icing. 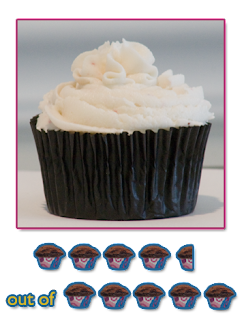 I'm not sure what kind of cupcake this was in all honesty. I think she said it was a 'wild berry' cupcake.

It was the first one I had and it ended up being my favorite. I figured I'd get the least exciting one out of the way, but I was so wrong.

It was deliciously doughy, but not to the point of being under baked. It was a doughier cupcake though.

There was a not-so-delicious-looking green glob in the middle of the cupcake, where filling would typically go. The green glob was the berries and it tasted great. There were some berry seeds, I guess, baked inside the top of the cupcake too.

I could have done without those, but it didn't hurt the taste of the cupcake in any way.

The frosting was incredible! It was sugary and smooth, but not whipped, which is what I prefer. The buttercream frosting was a great match for the very tasty cupcake. 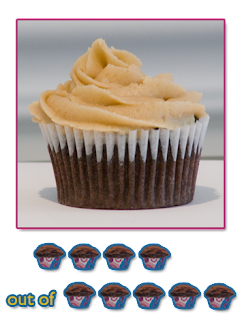 Talk about super moist! This cupcake was the most moist I think I've ever had!

It was a savory chocolate cupcake with some incredible and unique frosting. This frosting wasn't just peanut butter flavoring. It had a peanut butter-like consistency. It was definitely frosting, but it was thick. It was like buttercream frosting and peanut butter commingled to make an entirely new substance.

The frosting was very unique. I don't think I've run across frosting quite like that before.

That won me over right there, but combined with the incredibly moist cupcake, this cupcake gets 4 cupcake stars for sure. 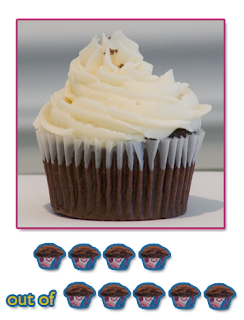 The subdued, yet sugary smooth, frosting makes a return! The chocolate cupcake had the same kind of frosting as the Berry cupcake that I'd had earlier.

It was a nice way to finish off my tasting -- with the same, delicious frosting from the Berry cupcake and the same super moist (did I mention it was moist?!) cake from the Chocolate Peanut Butter cupcake.

The thing that's interesting to note about all three cupcakes is that I wouldn't have even guessed they were vegan cupcakes if I hadn't known before I ate them.

They tasted just as good as any other cupcake. Well, in this case, they tasted better than a lot of cupcakes I've had.


The positives: amazing frosting all the way around, great taste and some unique aspects

The cost: $10.50 for the three cupcakes. I left a $1.69 tip as well since I paid with a credit card on one of those iPad apps (I always feel guilty not leaving a tip on those things...pfft). Oh yeah, there was also the $4.00 parking fee. So, fairly expensive cupcakes for a one-time stop, but if you're in the area or find that 90-minute free parking area, I'd definitely recommend going.