Thousands of people were in Concord for the Bank of America 500 this weekend. I made a stop, just south of the Speedway, at Granny Mac's Bake Shop.

I wasn't really sure what to expect going there. Had I checked out their website, I probably would've had a better idea.

Once you walk in, there are donuts, cookies and other goodies to the right. The cupcakes are to the left.

I started walking to the display case and quickly noticed that these cupcakes are huge! They’re Perkins Mammoth Muffins huge or Sam’s Club huge.

One thing's for sure: you don't need too many of these cupcakes to make a hearty dessert. 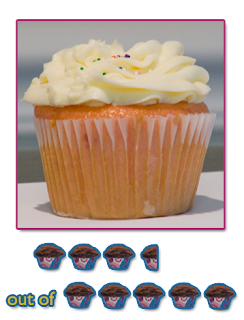 This cupcake was potent! I could smell it in my car on the way home even though the cupcake was securely packed into a plastic bakery box.

Unfortunately the cupcake wasn't incredibly moist. That would've made it a better experience. 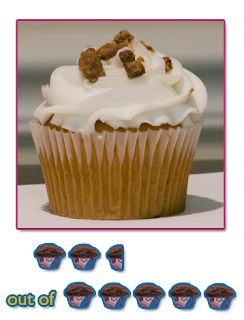 Oooh...I didn't like this one. The cupcake looked amazing, especially with the candy chunks on top of the frosting. It wasn't good though.

I actually didn't finish it. If it were a miniature cupcake, it may not have been so bad, but a huge cupcake that didn't taste very good? I had to leave a lot of it on my plate.

I'm not sure what went wrong with it, but I've had other peanut butter cupcakes with that same kind of stale taste. Peanut butter is a hard flavor to successfully capture in cupcake form. 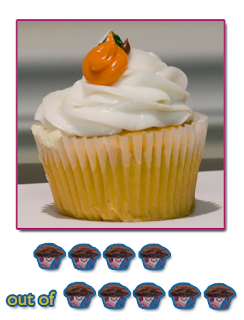 I love anything pumpkin, so it would be hard for them to mess this one up. Thankfully they didn’t.

It could’ve used a little more pumpkin spice, but it was a mammoth, moist, deliciously pumpkin-flavored cupcake. In other words, mmmm mmm!

The frosting, although plentiful on this cupcake, was my only complaint. It would’ve been so much better if it was cream cheese or if it was somehow infused with Cool Whip.

The white frosting was fine, but it’s a pumpkin cupcake. Go all out on it!

I didn’t end up eating the frosting actually. Since it was good enough, I enjoyed my pumpkin cupcake by itself.


The positives: these are seriously huge cupcakes! Great flavor in both the strawberry and the pumpkin cupcakes.

The negatives: I didn't like the peanut butter cupcake. The strawberry could have been more moist as well.

The price: not only are they massive, but these cupcakes are only $2.50 a piece.