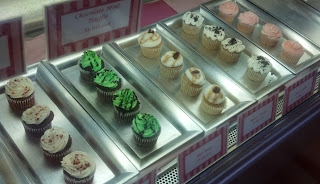 So, when I was on my way to Granny Mac's Bake Shop last week, I noticed there was another bakery in the strip mall right next door: Cake Makin' Sisters. Why not stop in and check it out?

It's a new shop that opened up in the past few weeks.

Apparently the owners took over the shop from a friend who wasn't able to operate the store anymore. It used to be Sweet Bliss Cupcakery.

There was a nice selection of cupcakes to choose from -- nothing too innovative, but enough to give the customer a few choices. 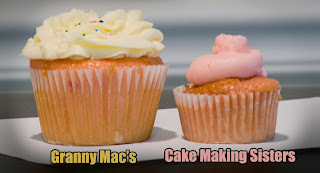 The first thing I noticed when I looked at the cupcakes, however, was how small they were. I've seen cupcakes that small before, but being right next to Granny Mac's? I don't know how they're going to make a profit.

Competing with Granny Mac's is their problem though.

My task was picking out two cupcakes to eat. I settled on a strawberry cupcake and an oreo cupcake. 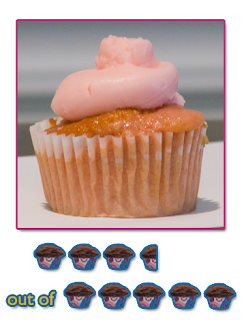 It's hard to go wrong with a strawberry cupcake. The Cake Makin' Sisters didn't mess it up. In fact, their version is one of the better ones I've had. There was a burst of strawberry flavor (a must for a good strawberry cupcake) in both the cupcake and the frosting.

The cupcake was tiny, so it only took a few bites for me to finish it off, but there was one advantage to the smaller size: the frosting-to-cupcake ratio was near perfect. Too many times I've had a glob of frosting left over on my plate.

It's that or not enough frosting. Because of the cupcake's small size, piling a tower of frosting on top wasn't an option. The sisters got it just right.

There was a bite of strawberry-flavored frosting to go with each bite of tasty cupcake.

In addition to being flavorful, this cupcake had moistness going for it. Maybe being smaller helped in that aspect? 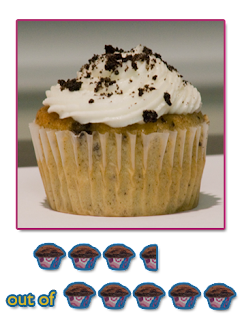 It's been a while since I'd had an oreo cupcake.

This was a good one. I particularly liked the little Oreo crumbs that were sprinkled on top of the frosting.

There was an authentic Oreo taste in this cupcake and it was all in the frosting. The cucpake (also moist) was good, but the frosting stole the show.

This vanilla cupcake wasn't filled with cream or Oreo chunks but you could tell Oreos were mixed in.


The positives: there was a nice flavor in the cupcake and the frosting

The negatives: the size was fairly small. Neither cupcake was 'OMG amazing!'

The price: it cost $6.44 for these two cupcakes. That's way too expensive for the size, especially being so close to Granny Mac's