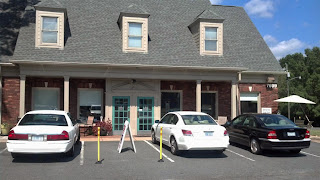 I’m going to guess that Daphne’s Bakery probably dominates the central part of East Charlotte. If you “Charlotte cupcakes,” you’ll see that there aren’t any other cupcake options in that area.

Daphne’s is tucked away – off some of the main Interstates, but still easy to access, as it’s off of Matthews-Mint Hill Road.

I hadn’t made my way to Daphne’s until last week. I was surprised to see there were a handful of people in there – some ordering treats and others eating lunch in the conjoined Tia Rose café area.

As far as a cupcake selections goes, there wasn’t an overwhelming amount, but there were eight different flavors to choose from – including vanilla, red velvet, key lime, funfetti, chocolate and pink lemonade. 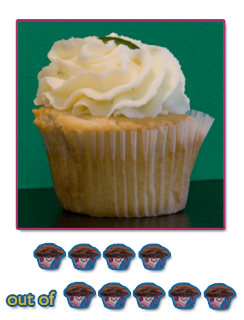 I’d had key lime cupcakes before at Decadent Designs and Polka Dot Bake Shop, so I figured I’d give Daphne’s version a shot.

This one was very impressive! The lime flavor was found mostly in the frosting. It was somewhat subdued. Vanilla initially meets the taste buds, but the lime kicks in at that point.

It was moist, but it wasn’t like biting into air.

The frosting didn’t disappoint either. It was creamy and sweet – but not overly sugary.

You combine a fluffy, soft cupcake with creamy, sweet, lime-flavored frosting and you get a winning combination. 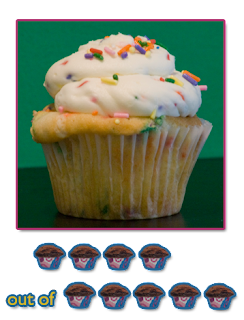 Some cupcakes look appetizing, but fairly normal. This one looked a trip to the carnival!

Forget eating it -- it was fun to look at. I’d say about 40% of the cupcake consists of a variety of colors baked into it. You add some frosting and sprinkles to that and you get a very enticing cupcake.

The cupcake’s consistency was very similar to the Key Lime cupcake, but it was a little thicker.

There was a slight bit of extra candy sprinkle flavor with each sprinkle that was baked into the cupcake. Each different colored sprinkle on top seemed to have a different flavor too.

I’m not sure what was the better combination – a fluffy cupcake with key lime flavored frosting or a vanilla cupcake filled with sprinkles, topped with frosting and extra sprinkles to boot.

The Funfetti cupcake was another tasty cupcake, for sure. 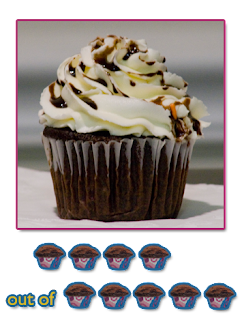 This cupcake kind of looks like a hot fudge sundae and it kind of tastes like one too. The cupcake is moist, but the extras are what I really enjoyed.

On top of the cupcake sits a decent-sized dollop of frosting that tasted like a variation of whipped cream. On top of that is some chocolate drizzle.

The cupcake’s flavor didn’t stand out as much as the other two. It was your standard chocolate cupcake. With the frosting and chocolate syrup added to it, though, it was flavorsome.

They’re not the best cupcakes I’ve ever had, but they were certainly worth the stop.


The positives: I liked the variation in looks and flavors. The flavors weren’t unique, but each cupcake did taste like an entirely new cupcake – not like the same cupcake with a different flavor frosting on top.

The negatives: I’d be interested in trying a couple of cupcakes that are a little more unique. They didn’t have any on the day I stopped in.

The price: they're very affordable at $1.50 for the standard chocolate or vanilla and $2 for the gourmet flavors.