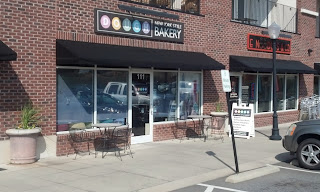 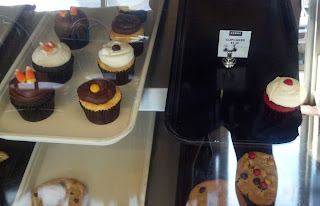 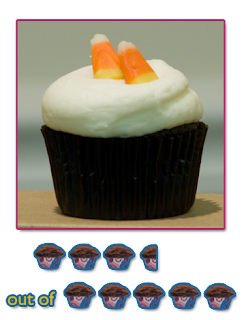 The chocolate cupcake was actually very good. It wasn't very moist, but it had a nice taste.

Some chocolate cupcakes have that chocolate brownie taste. This one didn't. It certainly seemed like there was some dark chocolate in it, which was fine with me. Dark chocolate seems to trump milk chocolate every time, no matter what edible form it takes.

Like I said before, I'm usually a fan of chocolate treats that is topped with vanilla frosting. Those make for some of the tastiest cake donuts. That combination worked well for DOUGH's cupcake too. The candy corn candies were a nice touch, though I assume they were added specifically for Halloween. 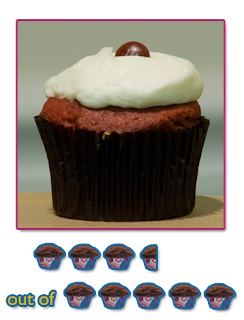 This cupcake was a little unusual. It didn't taste like your typical red velvet cupcake. There was a little bit of chocolate flavor that ended each bite, but the majority of the taste was vanilla.

Not to be outdone, the frosting wasn't typical either. It wasn't exactly cream cheese, but it didn't taste like the same frosting that was on the chocolate cupcake. The single red red M&M tasted normal though.

I couldn't pinpoint what was so different about the flavors in this cupcake, but it wasn't a bad thing.

The cupcake and frosting were flavorful enough, even if they weren't completely typical. I'd deem it a unique success.


The positives: the cupcakes, though simple, proved that simple, when done right, works.

The negatives: neither cupcake was very moist

The price: $4.98 for the two cupcakes seemed a little expensive. It breaks down to $2.49 a piece, but I guess I've been spoiled by Granny Mac's.