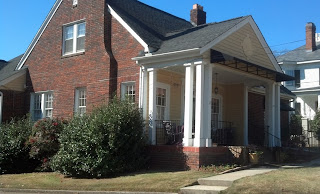 I'd been to Charlotte Cupcakes - Cupcrazed">Cupcrazed before, located right off of I-77 in Fort Mill, but I'd never been to the actual heart of the town.

I decided to change that, so I sought out the only other cupcake shop I could find in the entire town: Savannah's Dining, Bakery and Catering.

Taking the back roads into Fort Mill on a sunny Fall day? Very relaxing.

Well -- except for taking a couple of wrong turns and then my GPS telling me I was at Savannah's when I was actually three blocks away. Other than that -- very relaxing.

Savannah's is house-turned-cafe, located in a brick home on Confederate Street. When I went they didn't have a very large collection of cupcakes. Like a lot of bakeries I've been to, the focus isn't just on cupcakes, so the selection seems to be smaller. With a smaller selection, there obviously wasn't a lot of unique or interesting flavors either.

There were actually only two options to choose from: vanilla and vanilla -- each one with different frosting and toppings.


It made the decision on what to order very easy. 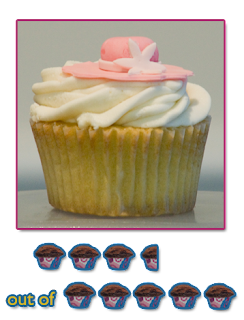 A sign inside of Savannah's near the register mentioned that they do catering for the Red Hat Society. That would explain the design of this cupcake. I have to say, as cupcake designs go, this was cute.

I'm actually not sure if the hat was edible. I typically don't like the uber-sugary candies that are placed on cakes and cupcakes, so there wasn't a lot of interest in determining if the hat was actually a candy. I gave it a couple of nibbles, but didn't get anything out of it, so I tossed the hat in the garbage.

The cupcake was fairly small and wasn't extremely soft. That didn't matter much though. The cupcake tasted very good. It had a very fresh vanilla flavor. Even though the cupcake wasn't very moist, it didn't taste stale at all.

The frosting, just like the cupcake itself, was delicious. You'd think a vanilla cupcake with vanilla frosting could end up being somewhat boring, but this little vanilla cupcake is an exception. Vanilla Cupcake (with nuts and caramel)

The clerk at Savannah's wasn't sure what this cupcake was. There wasn't a sign in front of it that indicated a flavor. I decided to be brave and try it. Anything with carmel can't be bad, right?

When the clerk went to the back to box it up, she and another baker taste-tested the cupcake to figure out what flavor it was. The clerk returned and said that it was dry, so she didn't feel comfortable selling it to me. She wanted me to have a good first experience at Savannah's.

I thanked her, but took the cupcake anyway. She didn't charge me for it, so that was nice. Since she said it was dry, I microwaved the cupcake for about 10 seconds when I got home.

It turns out there wasn't much to worry about. Just like the vanilla cupcake, I didn't get a mushy mouthful of cupcake when I ate it, but the flavor of the cupcake and frosting more than made up for that.

Like I said before, I love carmel, so that was an awesomely tasty addition. I typically don't like peanuts, almonds or any other kind of nut in any kind of baked good. In this case, I didn't even mind it. Maybe that's because it was smaller and there wasn't enough room on the top of the cupcake for a giant cluster of nuts.

There was just enough to add a nice burst of taste. 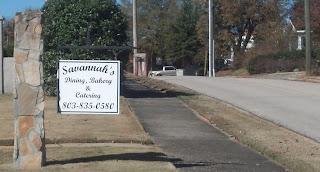 The positives: great taste, even though they weren't extraordinarily moist

The negatives: they're a little small, so they'd make a nice treat after a good meal. There's probably not enough cupcake to qualify as a "snack" though.

The price: it's $2.18 a piece for the cupcakes at Savannah's