It's back to Concord this week. After trying DOUGH Bakery last week, I went closer to the downtown area and found The Sweet Life.

I had to double check the address. My GPS said I was at 196 Church Street, but it the building didn't look like a bakery from the outside.

After getting out of the car I realized there were two large banners with a cupcake and the words, "The Sweet Life," on it. However, when driving by, trying to pay attention to traffic (minor details, you know...), the sign didn't jump out at me.

The Sweet Life is located inside an old house-turned-business. Apparently there's an invitation/graphic design business inside as well. I'm not sure if it's run by the same people as the cupcake shop or not. When I went inside, the only thing I spotted was the bakery. 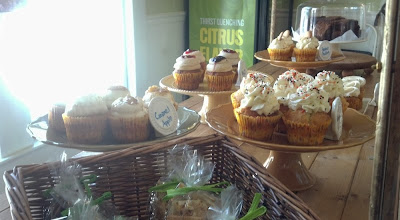 The first thing I noticed was the interesting choice of flavors. They had banana pudding, vanilla chai, peanut butter and jelly, and caramel apple.

Each cupcake looked fairly large with a pile of frosting on top. A good first impression, indeed.

I passed on the banana pudding cupcake, but got the vanilla chai, caramel apple and peanut butter and jelly. 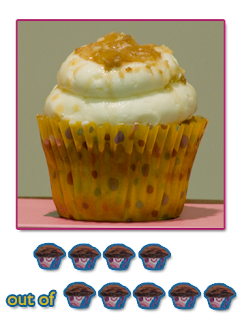 I wasn't sure I'd like the caramel apple cupcake, so that's the one I tried first. I love my mom's homemade apple pie, but there are a lot of not-so-delicious apple pies out there too. I usually have a nice scoop of ice cream to go with my apple pie. No ice cream to accompany this cupcake though.

Turns out, this cupcake was tasty. It had a taste that was very reminiscent of apple crisp.

Despite the extra flossing that was required, the cupcake was very good. It was a nice Fall treat. 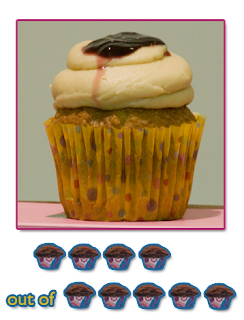 I resisted trying the PB&J cupcake as long as I could. I ate the caramel apple cupcake first, but then it was peanut butter jelly time!

There was some delicious looking grape jelly placed on top of the frosting, with a smidgen of it drizzling down the side of the cupcake. When I unwrapped this cupcake, I knew I'd need a lot of soap and water to get the sticky jelly off my fingers, but that was okay. It would be worth it!

This cupcake shocked me, to be honest. Very rarely have I found that unique-flavored cupcakes actually live up to their claims. This one did though. It tasted just like an actual peanut butter and jelly sandwich.

This cupcake had a peanut butter flavor that was similar to a Nutter Butter. The grape jelly tasted great! The frosting was delicious too. It really was an ensemble cupcake. Each flavor combined to make an authentic-tasting peanut butter and jelly cupcake.

If it weren't so sticky and easier to take on the go, I could see peanut butter and jelly cupcakes taking off in a big way! I know I'd take one to work each day if I could. 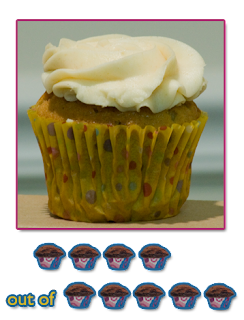 I asked the woman at the counter what the vanilla chai cupcake tasted like. She was afraid to say, 'there's more spice,' because that usually scares people off, but, essentially, she said, "There's more spice."

She was right. You can definitely tell the difference between this cupcake and a regular vanilla cupcake. It's not spicy as in, 'Grab me a glass! I can't breathe!' It's more like some extra flavor added in.

The vanilla chai cupcake has visible black specks in the cupcake too and those specks are mighty flavorful, trumping a regular vanilla cupcake any day of the week.

The negatives: I wasn't the biggest fan of the flakes in the caramel apple cupcake, but it was nice to have something different